From ships to engineering

So here it goes, I’m going to tell you what I did after upper secondary school and how I ended up being an engineer.

The end of upper secondary school was the end of a huge chapter in my life. I was slightly lost. I for some reason thought that it would just become obvious to me what I wanted to do, as if one day over breakfast I would just realize that that is perfect, that is what’ll I’ll do. It didn’t become obvious; or rather what I obviously wanted to do wasn’t coherent with reality.

I wanted to go to sea. I wanted to be a sea captain like my father and his father. Yet I trusted father as he waved it off in his brutish way, the sea is not what it was. He told me that I could become a sea captain whenever I wanted, but it wasn’t to be the main focus of my education. I knew it to be true; I wouldn’t have accepted it otherwise, because the sea really isn’t what it was. My romantization of the sea came from growing up on his ship and signing on as a deckhand on T/s Gunilla, the education bark of Öckerö Gymnaiseskola. Ships like that serve no function today, they are pretty and take rich people out on long trips (or students on educational trips). And so I had to lay that dream to rest as I tried to find something else.

Credit to Nicklas Jansson that took this photo back in 2010 just after a storm on the bark T/s Gunilla.

I was in 3rd year and April came around. Right up until the very last day of application I changed the order of educations, the educations themselves, I deleted, I added… I felt like the world was imploding, I kept shouting at myself – just make up your mind. But it’s difficult – then again, I don’t need to tell you do I? I think I knew four people back then that knew what they wanted to study. I can only guess that many of you reading these blogs are sitting there, shouting at yourselves just make up your mind.

I ended up going home for the summer. I needed to go home. I interviewed for a bartending job at a family run bar/restaurant/café (most places on the coast of Spain probably fall in that category) and was hired on the spot by the son. The simplicity of pouring drinks, making coffee and bar work was appealing after three years of constantly trying to excel at everything. It wasn’t easy, the terrace would fill up in moments and we’d all be swept off our feet. A particularly vulgar mouthed waiter would each and every night go obscenely mental over customers and was quick to lay the blame of his mess ups on anyone but himself, a Czech girl would dart around as if on speed and while passing by to the kitchen call out drink orders for a table of twelve, with all the coffee combination imaginable cortado, con leche, nube, solo, manchada, sombra… and Juan. Juan would only take his coffee in a very particular manner and only in a glass, un Juan I’d have shouted at me. If it wasn’t perfect he would meander up to the bar and hover over me as I produced perfection – regardless of the amount of inpatient customers. It was hectic, it was hard work, but it was insanely fun. We were a bunch of weirdos that got a kick out of each other, late nights and silly customers.

The notion of not failing was hard wired, I would drop a glass and be so furious with myself that I went full-retard and started picking up the shards bare handed. I’d mess up a drink order and kick myself all evening. It was so ridiculous that I just wish I could go back and shake myself wake up, shit happens, get on with it.

All the while I was being observed by my newfound friend, the son, a 30 something that pitied the unknowing 19 year old that was I. He watched as I struggled and stood tense each and every day in deep thought. I couldn’t shake the idea of having to choose something, just choose anything. What will I do, what if it isn’t right? I really don’t want this. I really didn’t want to study; upper secondary school had been tough (I did an extended education in the same span as the normal 3 years, and went to sea). I was still coping with losing my best friend, to circumstances unexplainable. Like I said, I was lost. The son quickly found out about my travel bug and encouraged me each and everyday to just go for it. Ultimately I think it was going to happen anyway, but I needed that extra push to finally let go and decide. And so I decided; I would travel for one year, and then I would study. Something. Anything. If it wasn’t right – I would change field. I was so grateful that someone took the time to tell me to just follow my heart and to take a breather; it was just what I had needed at the time.

I bought a one-way ticket to India and nodded as father told me to stay away from Kashmir and Bangladesh. A 12-hour plane ride and 25-hour bus ride later I was in Kashmir and a completely different education had begun. The freedom of not having a plan, of not having to think about choices till the next April, of speaking to people that lived life so completely differently… I met people like Mae, I met some of my most epic friends to date, I climbed mountains, I drove motorbikes, I hitchhiked, I ran out of money, I made money. It all let me grow and find strength and calm within that I truly needed to take the next step in my education. I became kinder to myself and inadvertently to others, a trait that I cherish.

April came round again, this time round I didn’t apply for the universities I’d first imagined going to, I looked at the Swedish ones and calmly picked a few things I imagined would be decent. I picked economy at Handels, Industrial Economy at KTH, Marine Biology somewhere and Civil Economics at Lund. On the last day after not being able to decipher what on earth “Industrial Economy” really was I changed if for Computer Science. I know what Computers are I thought. I moved it all round a bit and CS was second place. I promptly forgot about it all and embarked on my next adventure.

Summer came and I’d met some people that thought I was the perfect engineer, and that IT can never be wrong, so I dropped my first choice and took my chances with the second.

That’s how I ended up at Computer Science.

I’m not by any means trying to persuade you to take time off, but rather saying that you shouldn’t be afraid to. And you shouldn’t be afraid to make the “wrong” choices, take a chance, try something and if it doesn’t work out you know yourself a little better, your limits a little more and just maybe you’ve narrowed the field a tiny bit. And, lastly, if I could tell my 19-year-old self something it’s that whatever happens, it’s not the end of the world.

“From ships to engineering” – you are in Korea, then it should be “To ships and engineering” (the reason why I have spent six months in “the land of the morning calm”). You are Swedish right? Then have a look at my blog where I write both about ships and how much I miss Korea, and about my life as Naval Architect in Norway.

Daughter, you are a genius. You write brilliantly. I will never forget the summer of 2011 either. Wheeling you down to that bar interview, sitting there on the terrace drinking coffee, annoying you. Jim and Mick singing at your leaving party, me dropping into your gap year (twice) that following winter. How we looked after each other! Then, the devastation at the end. I picked you up from Malaga airport, we went straight to a friend’s wedding. Piece of cake after a 36 hour journey! Later at home you sat on the floor and cried “why does it all have to end?” I cried with you. Luckily it doesn’t, so keep on trucking/writing/studying/and travelling, always. Whatever you do I will be right behind you (not literally!) I love you so much, and I am very proud of you. Mother x 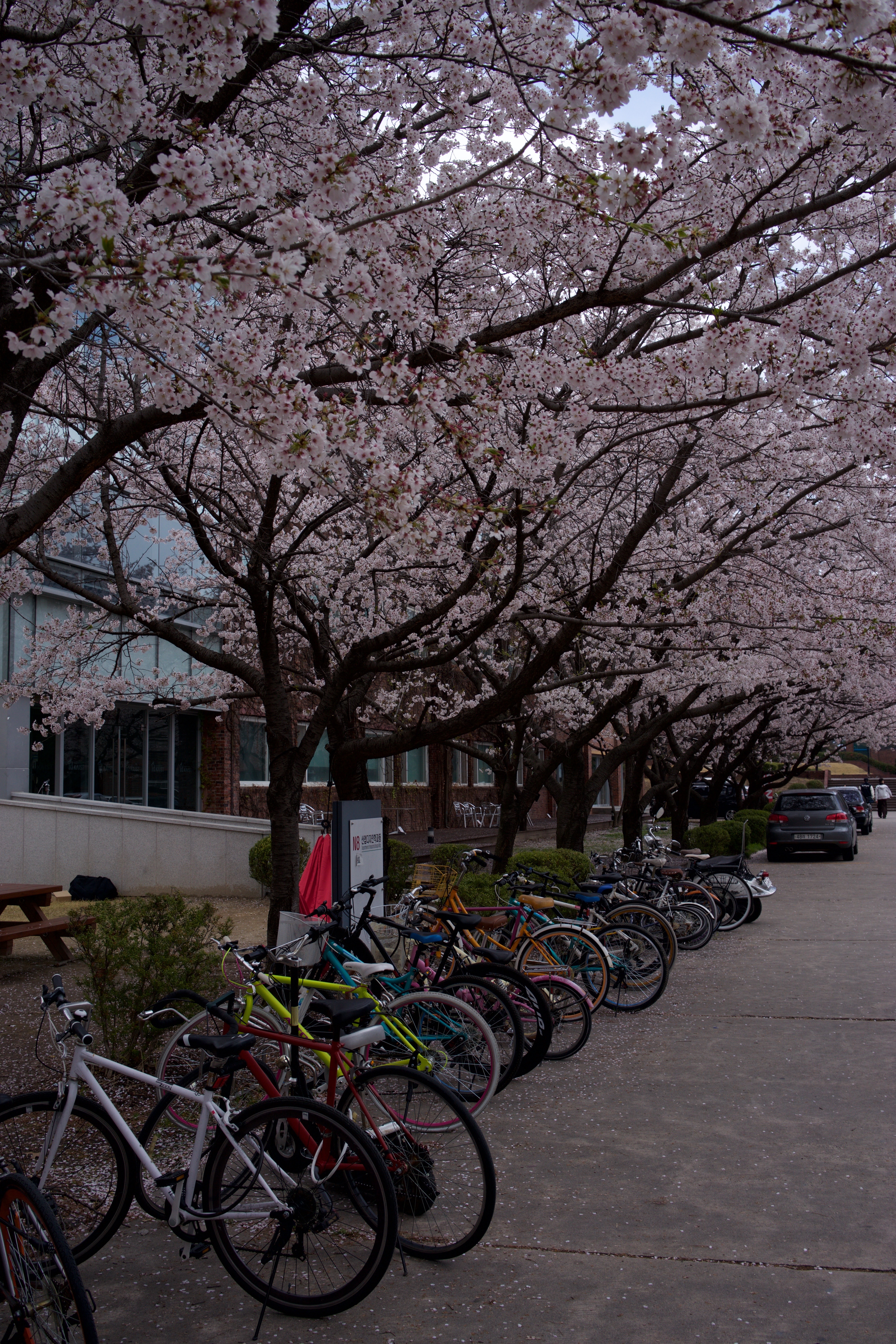 I’m back. KAIST (and KTH*) has kicked our butts the past few weeks, no joke. Midterms crept up on us and I found myself writing the fastest I’ve written in my life with the most Read more…

Excuses and Operating Systems with some Djikstra seasoning

So this is part 2 in my mini-course-description series. Please excuse my absence, the last week has been a drag to say the least and seriously stressful to say a little more. I couldn’t possibly Read more…